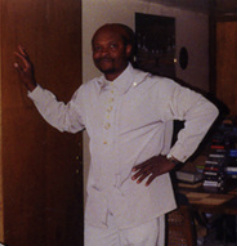 Salim Abdul-Khaliq was born Ron Charles in Chicago, Illinois in 1954. He was born with a constant desire to read, write and study.

In 1974, while in the army, he was positively influenced by a man named John Sanders, now known as Yahya Abdul. He became a mentor to Ron. This mentoring led Ron to do further research and investigation into the faith of Islam and into Malcolm X.

As a young black man Islam gave Ron hope along with a profound understanding of God and African American history. In 1974 Ron converted to Islam and changed his name.

The name change is significant and symbolic of a change of spirituality and consciousness. He is now known as Salim Abdul-Khaliq. This name means a peaceful servant of the Creator.  In addition, he also gave his daughters Islamic names.

God has enabled Salim Abdul-Khaliq to devote himself full time to his teachings and community activism. He owns a vast library in  Chicago, Illinois.
salim abdul-khaliq, flaming crescent society